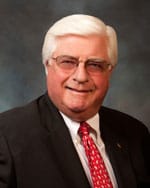 Johnny Zamrzla is the president and owner of Western Pacific Roofing and has been actively involved in the roofing and waterproofing industry since 1957.

His devotion to improving the quality of the roofing and waterproofing industry spans numerous organizations. Membership and activities include President of National Roofing Contractors Association, two-time Congressional appointee to White House Conference on Small Business, and chairman of the Coalition for Quality Affordable Housing 1997-present.

Throughout his career, Johnny Zamrzla has been the recipient of many awards and titles, including the RCA So.Cal. Award of Excellence, now known as the Johnny Zamrzla award, and the NRCA’s J.A. Piper Award, the roofing industry’s highest award of achievement.

Johnny Zamrzla is heavily involved in leadership and philanthropic roles on the local, state, and national level, including serving as president of the Showdown Rodeo, California Circuit Finals Rodeo. He serves on the boards of the Antelope Valley Board of Trade, Antelope Valley Sheriff’s Boosters, and the Antelope Valley Hospital Foundation. He and his wife Pam live on their working ranch in Lancaster.

Recent Community Activities and Awards which Johnny Zamrzla is involved in:

Johnny Zamrzla has twice been a congressional appointee to the White House Conference on Small Business and was a member of the state Senate Select Committee on Small Business. He was appointed by the California Assembly Speaker to chair the first committee on the underground economy and unlicensed contractors and was chairman of the Joint Committee on Reform of Asbestos for the Roofing, Flooring, and Pipe Industries

Click Here To Learn More About This Offer or Call:

Customers just like yourself take pride knowing our company: